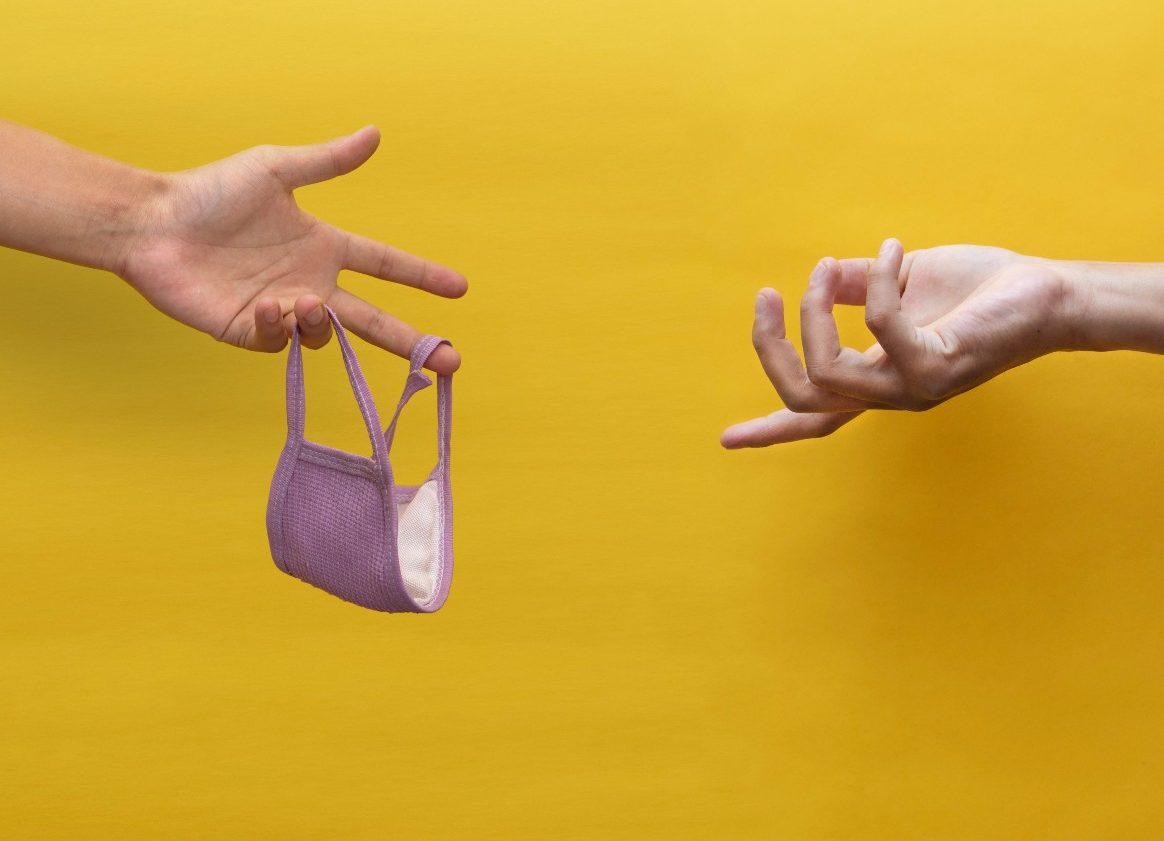 Perhaps unsurprisingly, the last year has seen global media consumption go through the roof. That’s largely due to the lockdown restrictions implemented across the world – something we covered back at the steroid-esque peak in April 2021. But how is everything, one year later? Now the initial must-stay-at-home period is over, what channels have kept up the gains? How has the way we consume media changed – and what long-term lessons, if any, are there to be learned from this time?


Read our ultimate guide to marketing in a crisis

In crises, it’s never more important to think long term and plan how your brand will navigate these headwinds. But that does not mean tightening your belt is the only way.

Learn how to survive and thrive

DCMN’s Digital Brand Tracker, run by our Insights team, has been surveying German consumers for many years now. In addition to finding out how consumers are responding to certain brands on metrics from awareness to trust, we’ve also been asking questions about their media consumption, finding out the channels and devices they’re using – plus getting some tasty demographic splits to boot. Here are our top  discoveries from the year of sofa, sourdough and social distancing.

Video games and online video are the top dogs 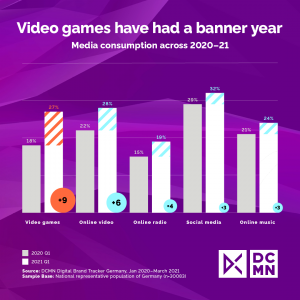 Video gaming was already a big industry. In fact, the worldwide PC gaming market is estimated to be worth around 37 billion US dollars, with the mobile gaming market generating $77 billion in estimated income. But it’s only become bigger in the midst of our current times. Since March 2020, the escapism provided by gaming of all forms has proved a hit, as our Digital Brand Tracker data shows. In fact, 27% of German consumers play video games, an increase of 9% from Q1 2020 to Q1 2021 – making it the media with the biggest gain across the year.

No surprise here. Online video, which we can also call video streaming, was also top of mind for German consumers the past year. When forced to stay at home initially, the world turned to the likes of Netflix and Amazon Prime. The launch of Disney+ too got the world talking (although the less said about Quibi, the better). Meanwhile, the buzz around individual shows such as Tiger King, The Queen’s Gambit and The Mandalorian has been at times deafening.

This all shows in our Digital Brand Tracker data, showing a 6% rise for online video from Q1 2020 to Q1 2021, making it the second biggest riser. 28% of German consumers are watching online video regularly. It’s kept up its gains in the somewhat-free period of summer 2020 and also now in 2021, when there is undoubtedly a bit of fatigue with regards to home entertainment. There’s no doubt about it: video streaming isn’t going anywhere.

What other channels did well? Online radio (+4%), social media (+3%) and online music (+3%) also saw small gains over the past 14 months. We’d wager this isn’t so surprising given the increased need for news and staying in touch (social media), and the increased need for entertainment (online radio and music). The reason these channels saw smaller gains might be down to a simple change in our individual setup and routines. For example, online music and online radio were often already used by employees in the office, while corona has afforded many of us more free time to seek out at-home entertainment in the form of video games and streaming. 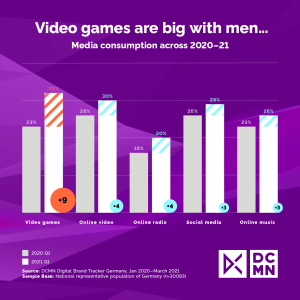 We then took a look at the different demographics, finding out that, interestingly enough, the genders are fairly balanced when it comes to the media they consume. While consumption increased most for women in online video (+8%), for men it was video games (+9%). But the differences were fairly narrow – and for both genders video gaming and online video are the top two most popular media channels that we track. 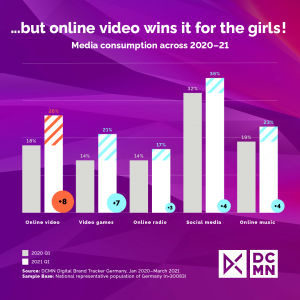 As for gaming, research has shown that women account for nearly 41% of all gamers in the United States – while in Asia, women now make up 40-45% of the Asian gaming population, according to Google and Niko Partners. Add to that this study, which shows that female gamers play all types of games, from console shoot-em-ups to mobile idle games. Who said gaming was just for guys? This is clear evidence that your gaming marketing efforts need to be inclusive of both genders – especially in a post-gamergate world. And as for streaming, the amount of content available online is so widespread now – Netflix spent a staggering 17.3 billion dollars (14.2 billion EUR) on their global content in 2020 – that any gender divide is not existent.

How the devices shape up: it’s a smartphone world 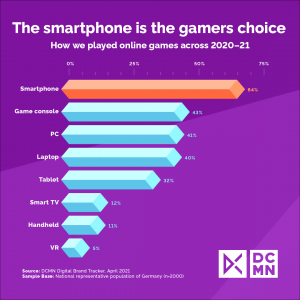 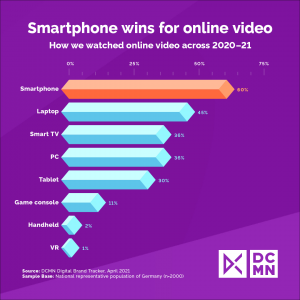 When it comes to device choice for those watching video or playing games online, smartphones clearly dominate. For video gaming, smartphones rule the roost. Whether it’s the likes of Wooga or Kolibri Games, producing idle games with strong character-led stories, or other games, such as Nordeus’s Top Eleven football game, people have been using their smartphones to get their game-on over the past year. In fact, 64% of German consumers game via their smartphone, making it a slight leader over the gaming console (43%). This speaks for the growing popularity and success of the much cheaper and quick-to-use mobile games. As for online video, it’s a similar story with 60% of German consumers using their smartphone to watch content, making it the runaway leader over the more traditional laptop (45%) and smart TV (36%). 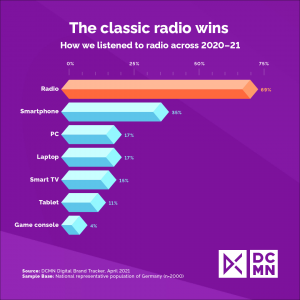 One place the traditional way still rules is radio. Our research shows that more than a staggering 69% still listen to the airwaves with the classic radio, leaving the smartphone in a distant second place, with PC and laptop trailing behind at just 17%. Still, with over 35% of German consumers listening via their phone, it’s no spring chicken. The narrative is clear here: with a lot of the world’s workforce at home, the classic radio came in handy, in comparison to a pre-corona world when the on-the-go types may have preferred their smartphone. 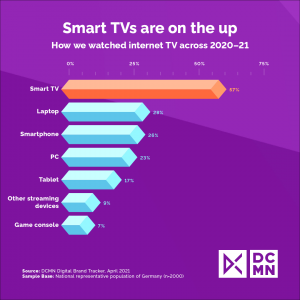 What about internet TVs? Whether it’s via a Roku, Amazon Fire or Google Chromecast device, smart TV’s are the one that dominate with 57% of German consumers, ahead of the slightly more ‘old-school’ laptop (28%) or smartphone (26%). This is a trend to watch – and a big reason why we believe marketers should be thinking about getting their connected TV strategy up to scratch.

That’s not all. If you weren’t already thinking about it, our DBT data has made it crystal clear: the modern German consumer loves to game and stream content – and largely on their smartphone. A wise cookie would keep this in mind when building their marketing strategy going forward. In the meantime, let’s have our fingers crossed that we are about to move into a hopefully more optimistic era – one with less time on the sofa and more out-of-home!

Video streaming was also top of mind for German consumers the past year. When forced to stay at home initially, the world turned to the likes of Netflix and Amazon Prime. The launch of Disney+ also got the world talking.

Online radio (+4%), social media (+3%) and online music (+3%) also saw small gains over the past 14 months. This isn’t so surprising given the increased demand for news, staying in touch and at-home entertainment.