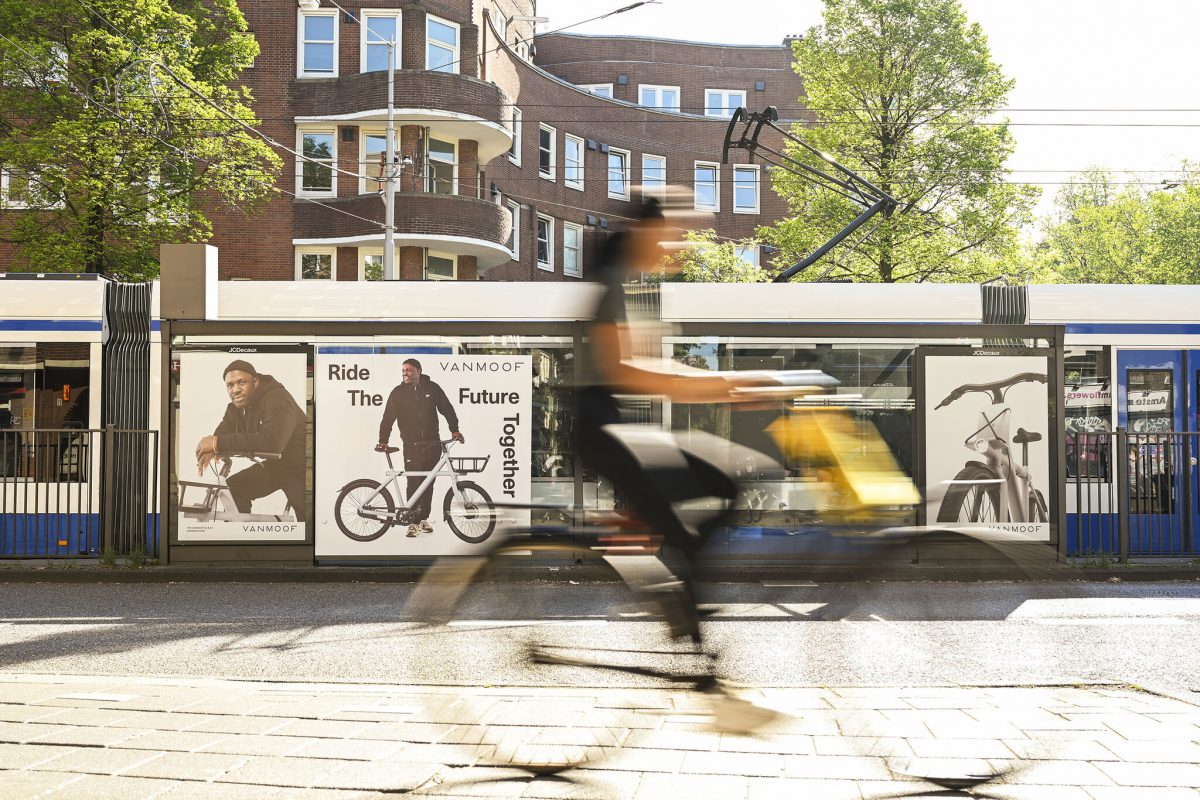 The 16-city campaign focused on a wide variety of high-impact placements, tailored to local possibilities — with initial results showing a significant uplift in conversions in all markets.

Berlin, 29 September 2021: DCMN, the Berlin-based growth marketing partner for digital brands, worked with VanMoof, the category defining Dutch e-bike brand, to launch their first global out-of-home advertising campaign across 16 major cities in Europe and the US.

The creative concept behind the last campaign, produced internally by VanMoof’s design team, echoes the company’s core belief — to redefine the future of urban mobility, keep up the momentum of positive change and get the next billion on bikes.

VanMoof, who recently raised  $128m in their latest funding round, came to DCMN to amplify the campaign and carry out the media booking across key global cities. This included street takeovers and live mural paintings in major hubs on both sides of the Atlantic — starting with The Netherlands, Germany, the UK & Ireland, and Belgium. This was followed by VanMoof’s first OOH campaign in the US, focusing on New York, San Francisco, and Los Angeles. To complement the OOH campaign, DCMN coordinated all TV media booking, with the spot airing in the US, Germany, and the Netherlands.

DCMN and VanMoof worked together to determine a shortlist of key cities, and a strategy based on business potential and local OOH opportunities. Narrowing the campaign down to 16 cities allowed the teams to focus on a wide variety of high-impact placements, tailored to local possibilities, and a good base of more standard objects for reach and frequency. In Amsterdam, for example, VanMoof became the first brand to book as many advertising spots in the one area (Museumplein) — ensuring a veritable brand takeover across tram shelters and digital out-of-home screens. In the heart of Berlin, along Holzmarktstraße, the campaign sprawled across a 160 metre long media wall.

Initial results from DCMN’s out-of-home measurement product, DC Analytics, show a significant uplift in VanMoof website visits in all campaign cities. The tool uses predictive modelling based on months of website session data for the campaign city and a number of control cities to forecast traffic expected without a campaign, and then compares it with traffic levels during a campaign.

Marc Dahmen, Lead Growth Strategist at DCMN Amsterdam, said: “VanMoof has built its reputation around being a disruptor in the e-bike space: following the status quo isn’t how they’ve developed their product, or how they approach their marketing. It’s been very rewarding to work with a team who care not only about reach and frequency, but also the impact of activities on their audiences. This gave us the opportunity to include some unique placements in our campaign plans. The results truly speak for themselves in terms of marketing performance, but also prove that the campaign message landed well with VanMoof’s audiences.”

Sebastian Mehldau, Head of Growth Marketing at VanMoof, added: “As one of the world’s leading e-bike brands, city streets are VanMoof’s natural environment: creating a large-scale OOH campaign across key cities made perfect sense, particularly in locations where we are building a network of shops and service locations. But running a global campaign across so many cities also requires a huge amount of planning and expertise, and DCMN turned out to be the perfect fit for us.”

DCMN is the growth marketing partner for digital businesses and startups. The company’s holistic, data-driven approach combines technology with expert knowledge to grow the market leaders of tomorrow.

From its headquarters in Berlin and five international offices worldwide, DCMN equips its clients to scale efficiently in their own markets or internationally, whether they need creatives, media plans, or growth strategies. All of this is supported by technologies DCMN designs and builds – based on over a decade of experience helping digital brands grow.

Independent and owner-operated, DCMN was launched in 2010 by Andreas Dengler and Matthias Riedl. To date, the company has helped nearly 400 digital brands worldwide to scale their businesses, including Fairphone, Idealo, Ring, VanMoof, Vinted and Wooga.

VanMoof was founded in 2009 by Taco and Ties Carlier, two Dutch brothers with a vision of the perfect city bike. Now their bikes are changing cities and leading the current wave of people choosing e-bikes.

VanMoof’s sleek, multi-award winning rides offer a high-tech and feature-rich experience for a devoted worldwide community of almost 200,000 riders and counting. The iconic integrated frames mirror a fully integrated end-to-end company that has upended the bike industry by taking complete ownership of everything from design and production, to sales and after-service. As one of Europe’s fastest growing companies, VanMoof is on course to redefine the future of urban mobility and get the next billion on bikes.

VanMoof Brand Stores can be found in Amsterdam, Berlin, London, New York, Paris, San Francisco, Seattle, and Tokyo, with expansion planned to 50 cities worldwide through dedicated Service Hubs by the end of 2021. Ride the Future at vanmoof.com.