Mobile games developer Wooga wanted to scale with TV into new markets, particularly in the US. But the US is a big, complex market: so how about testing in Canada first? That’s where we came in: as a partner that can track, measure and optimise successful TV campaigns to accelerate their growth.

Since the story began in 2010, Wooga has established itself as one of the biggest mobile game publishers in Europe and the US, particularly focused on the W35+ group. But in 2019, the Berlin-based online gaming publisher decided it was time to scale – and particularly in the US. Exciting times! To do so, they wanted to try out TV marketing in the US for the first time, but there were a couple of caveats. Namely, they were unsure if and how performance could be measured and optimised.

That’s where we came in! As experts in scalable growth and pioneers in TV attribution, we were the perfect match. Our data-driven teams, more specifically our offline marketing and data science teams, discussed Wooga’s game June’s Journey and made a convincing case that TV marketing could help accelerate their growth. 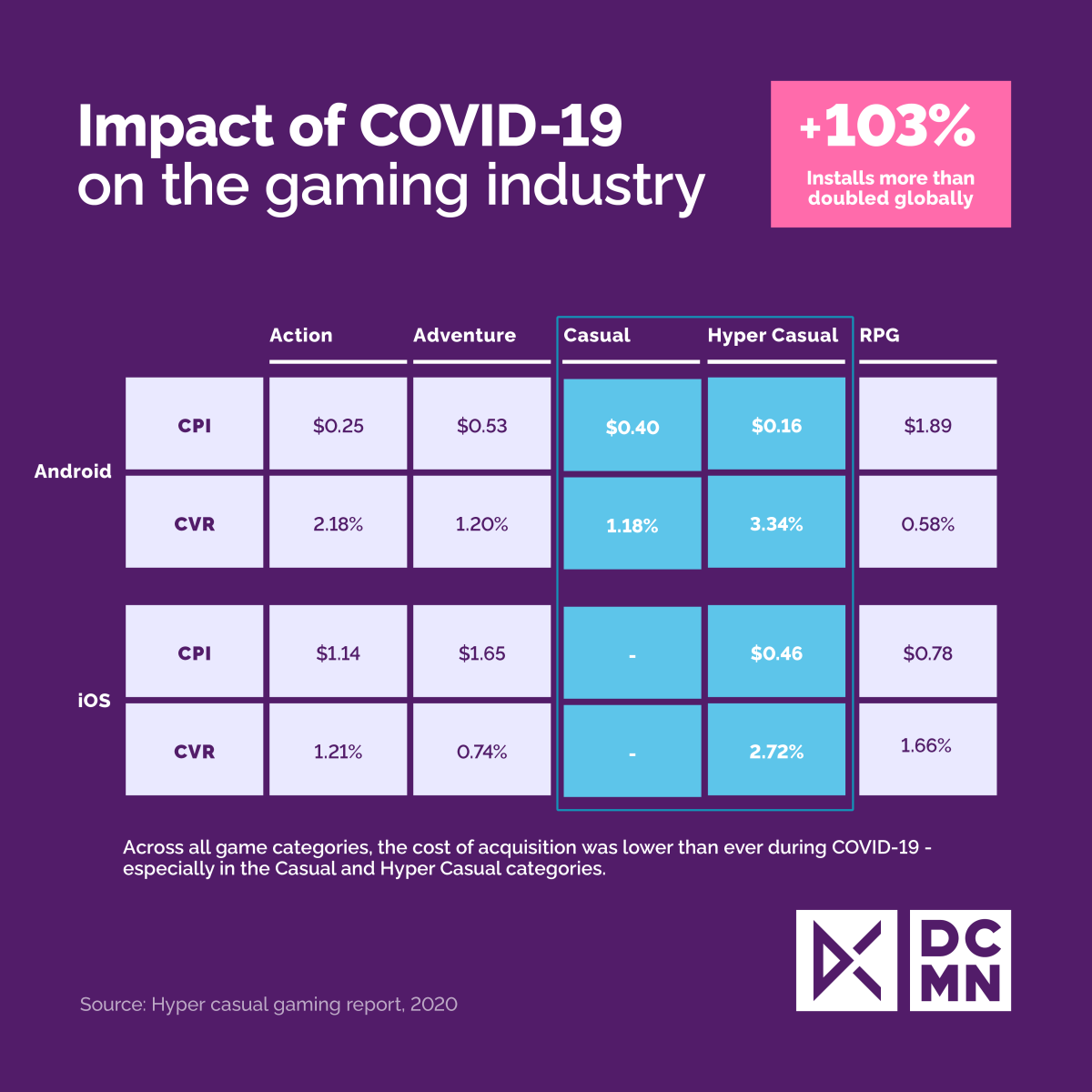 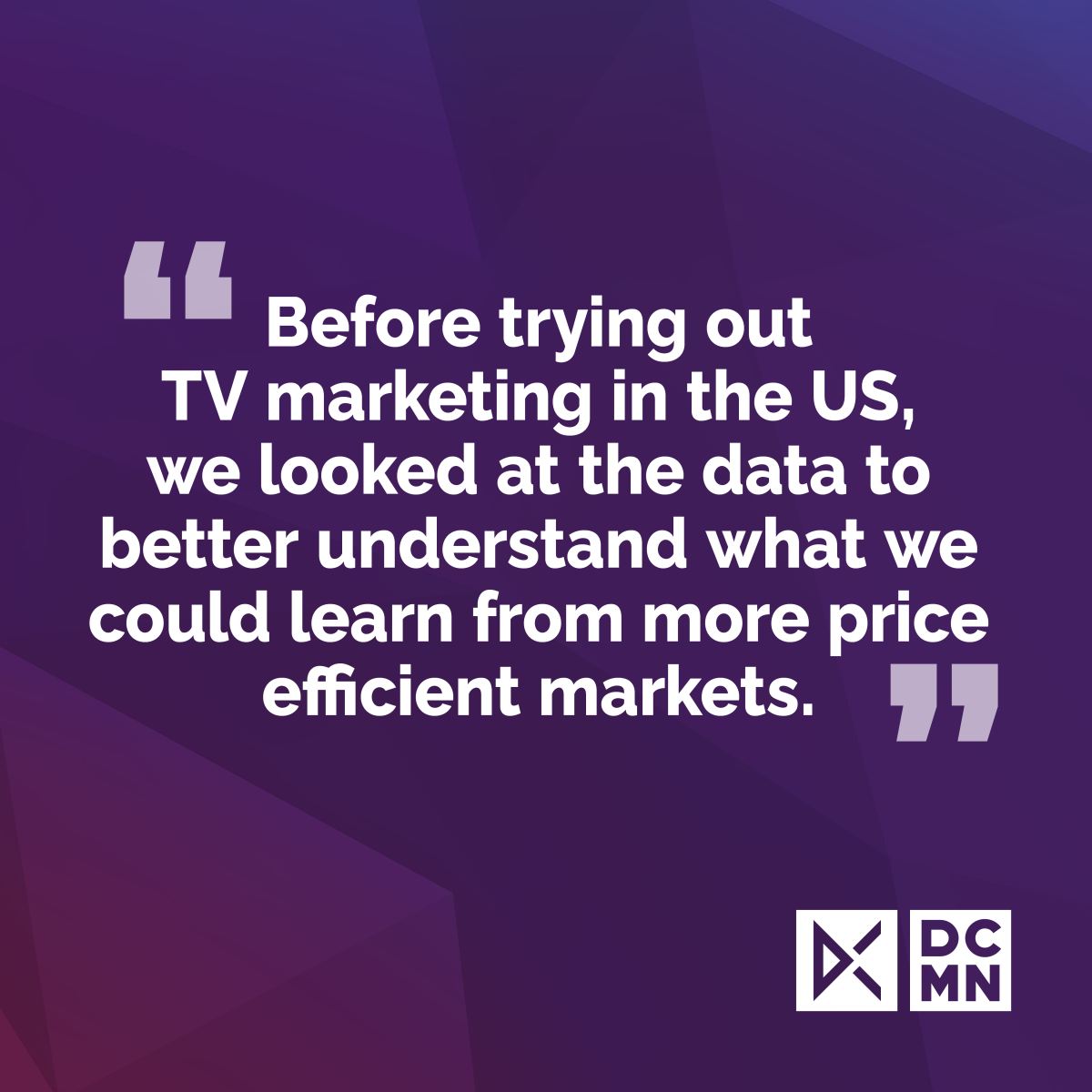 That notwithstanding, before heading into such a gargantuan and challenging market, it was important to be prepared. That’s why, before trying out TV marketing in the US, our team took a look at the data to better understand what we could learn from more price efficient markets. We reviewed markets with similar demographics, app usage and purchasing power tied to Wooga’s CLV and ARPU per market. With this data in hand, we decided to do a joint TV test with Wooga in Canada– a market similar to the US in terms of the consumer but more cost efficient.

There was the evidence we needed: TV is a channel that could drive ROI for Wooga. Now for the US, our first test in the land of the stars and stripes was in January 2020, in order to leverage advantageous rates at the beginning of the year. 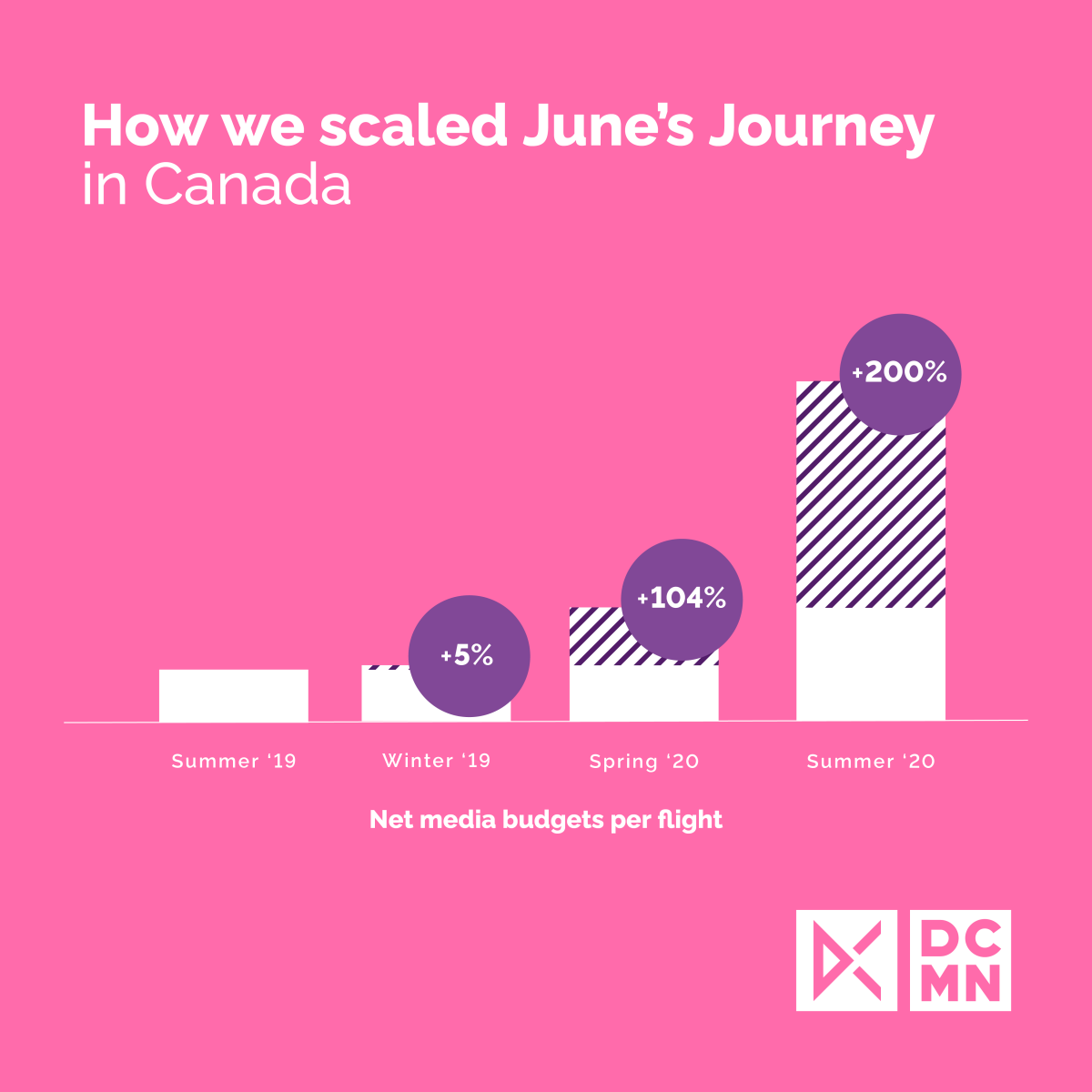 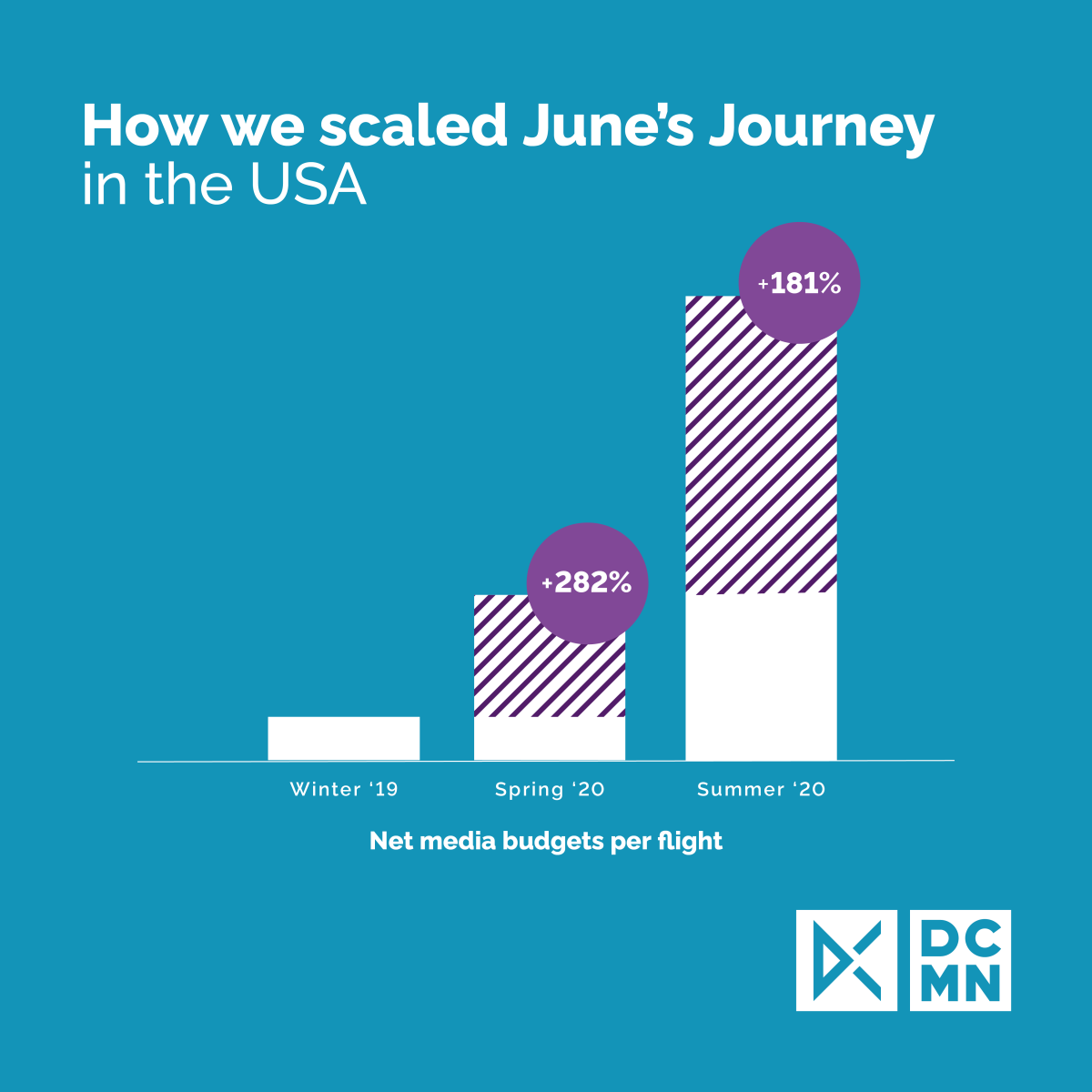 We launched the campaign with a solid test budget for three weeks, allowing us to focus on performance channels targeting June’s Journey’s W35+ target group. Fast forward to March 2020: As we were evaluating the results of the test campaign and coming up with our next steps, COVID-19 struck.

Oddly enough, this also gave us an unprecedented opportunity: the chance to get back on US TV. With both highly discounted rates and higher TV viewership, it was a great chance to test channels that had previously been too expensive for a performance campaign. The test went well, Wooga tripled the budget and we launched a second three week campaign in April 2020. The results speak for themselves — 160% ROI definitely is nothing to be sniffed at!

Now there was no doubt that TV is a performance channel for Wooga across markets. Where did we go from there? We went live in the US with a monthly budget three times the size of our original test budget. Meanwhile, DCMN then managed TV campaigns for June’s Journey in Canada, as well as Australia, Germany, Austria and Switzerland. A success story for the ages! 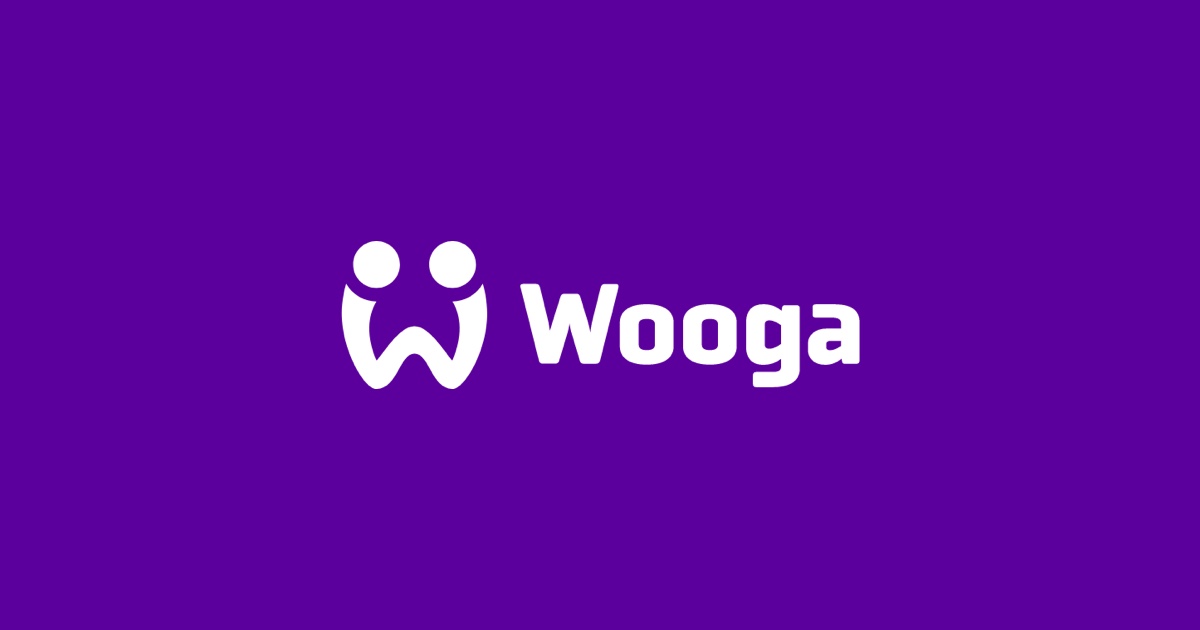 Founded in 2009, Wooga is a market leader for story-driven casual games.

Based in Berlin, over 250 employees from 40 different nations develop high quality games with engaging stories at the core of the experience.

Wooga’s aim is to play a memorable and positive part in people’s lives and create joyful moments they look forward to playing everyday. Since late 2018 Wooga has been part of Playtika. Read our interview with Wooga here.

INSPIRED BY THIS WOOGA CASE STUDY? WANT TO GROW? GET IN TOUCH!

Carry on filming: live shoots in times of corona

How to hack the Super Bowl as a digital brand

Time for an upGrad: DCMN enters the edtech space

Amazing Amazon: The ATL channel you never knew you needed