Tracking the Untrackable: How We Solved the ATL Offline Tracking Puzzle

Tracking the Untrackable: How We Solved the ATL Offline Tracking PuzzleDCMNJuly 17, 2020February 10, 2022 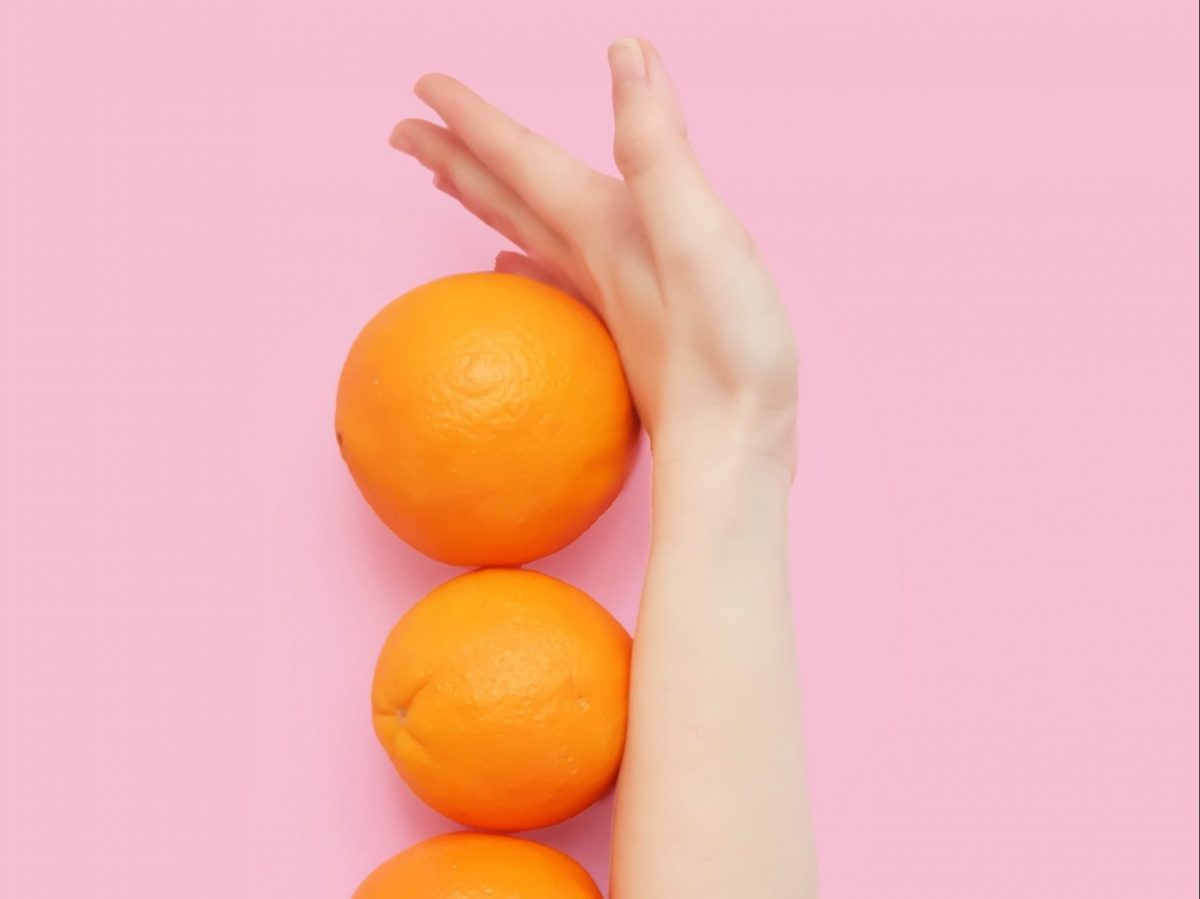 The digital world was once scared of offline, while hyper focus on performance led a lot of businesses to shy away from ATL channels. Here’s the problem: Tracking online ads is straightforward, as is increasingly TV, something we’ve pushed forward since we began offering TV attribution with our launch in 2010. But OOH and radio on the other hand have traditionally (and naturally) been incredibly difficult to track and optimise.

Given that people are outside and on the road when consuming said channels, it’s rather difficult to prove who saw or listened to the ad and then went on to visit a store or buy a product at a later point in time. The immediate causality so crucial for marketing is missing. Even with TV, people can react more quickly, and, knowing where and when a spot is airing, it’s possible to track uplift in the seven to fifteen minutes around the spot.

Here’s how we solve the ATL puzzle

So how can this issue of ATL attribution be solved for radio and OOH? Our solution is a part of our DC Analytics stable, which was originally just our TV attribution technology – but has now expanded as a term to encompass all our tracking technologies.

One main difference: Unlike our TV tracking technology, this isn’t an online service, but a tool used by our offline managers for our clients. It comes from an algorithm implemented by our plucky Data Science team, one that aims to work out the success of your ATL campaign by finding out what would have happened if you hadn’t run the campaign.

After developing the algorithm, it was time to create an application which aims to estimate the impact of a regional offline campaign, whether it’s OOH, radio or even cinema. Next up, you determine your KPI. This can be anything from website visits (usually), to form signups and conversions. Then you are ready to go!

Data matters: How it works

Here’s an example of the woof woof variety: The oh-so intelligent dog community of Berlin (the Silicon Valley of the canine world) needs glasses urgently, so they can work on computers and push forward the tech innovations of the future. Enter a canny entrepreneur, who makes a company selling glasses to dogs – and names it Ray Bark.

A year or so later, it’s time to scale! Now the management team wants to expand the business into sunglasses. In order to see how big the demand is for sunglasses, they test them in the major market of Berlin, but not in other markets where they are present such as Dresden, Frankfurt and Hamburg. 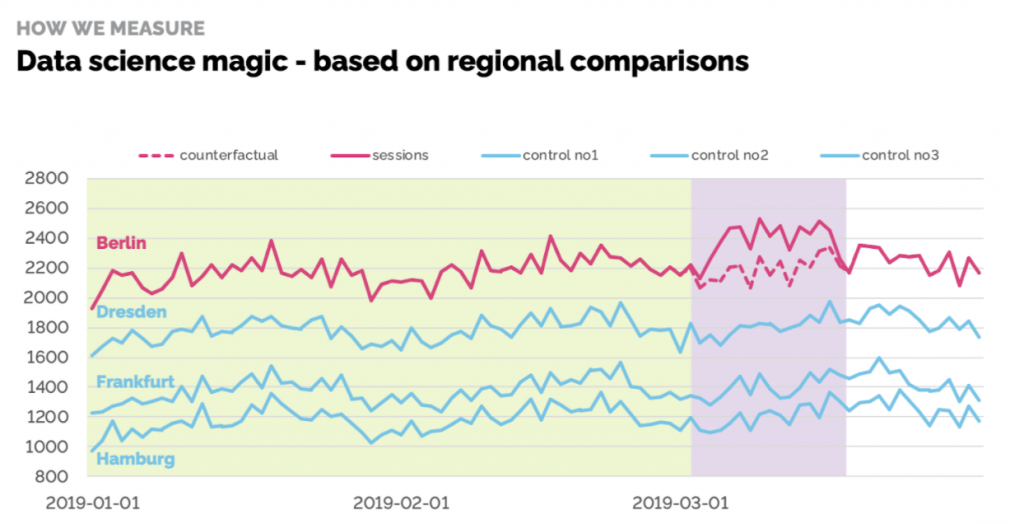 What does this mean? It makes it possible to find out how the sales figures of Ray Bark would develop if it also sold sunglasses. Incidentally, that’s also how the algorithm works that we use to measure the impact of offline marketing in the human world.

The graph above shows it in more nitty gritty detail: The red line observes website traffic in Berlin over the period from January 2019 to March 2019, while the dotted red line is what our algorithm constructs, the baseline traffic (also called the counterfactual or what-would-have-if). For the time of the campaign, we created the counterfactual by using information from the data collected for other cities in Germany. This helped us understand how the traffic would have developed in Berlin if there was no marketing campaign.

We try to use the information from our dog stores in the other cities to understand the red dotted line. Let’s take a closer look at that. 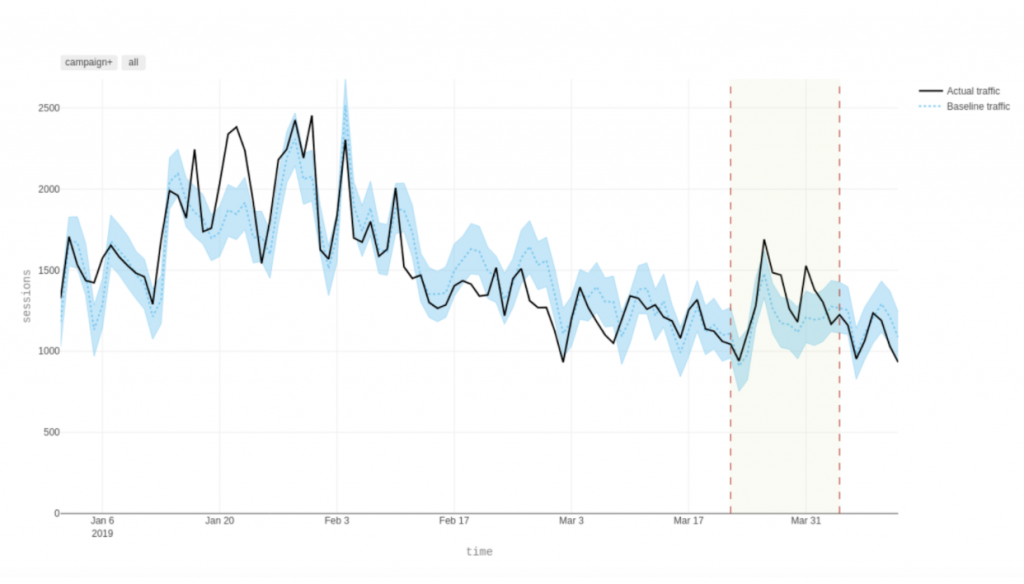 Here, we even go one step further. Now we are not only able to understand what would have happened, but we can also compare our expected reality with the real reality and calculate our overall increase in sales and traffic over our campaign period. And guess what? Turns out dogs love shades! 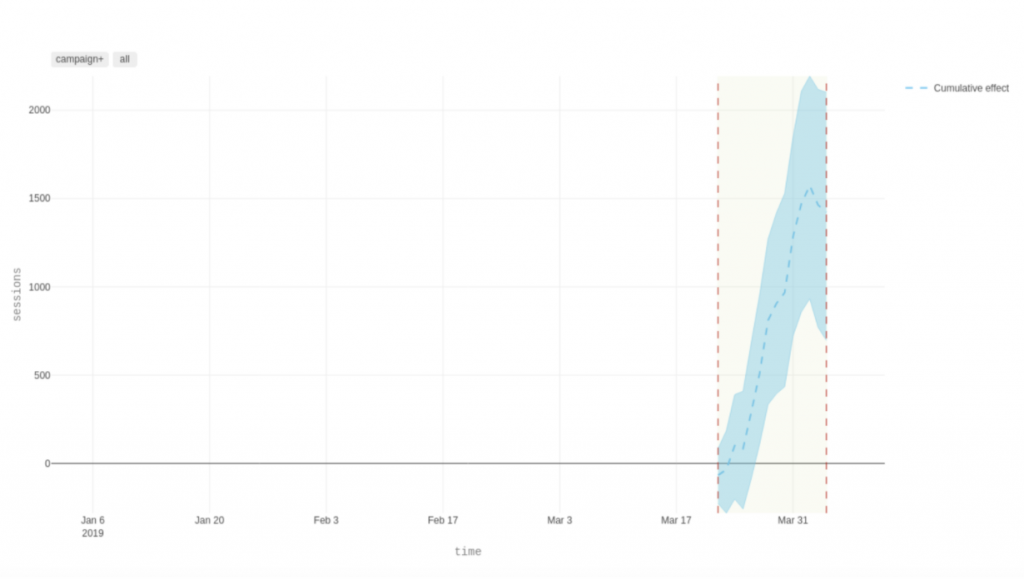 Whether it’s the dog world, or the human world: We can infer the impact of the campaign by looking at the difference of what is being observed on the website and what we estimate by creating the counterfactual. In order to understand the overall effect, this is cumulated over the entire campaign period.

The benefits of this intuitive methodology are never-ending. First and foremost, it answers the long-held question of how to track ATL for companies. Keen to move past online and TV marketing, but worried the other offline channels aren’t as trackable? Not a problem! In addition to being now trackable, OOH and radio are both great for brand building and performance, something at DCMN we even put together and call Brandformance™! And if you’re interested in finding out more positives about radio, we’ve even done a whole deep dive into whether or not radio is the right fit for your brand and how to execute a campaign.

What else? Our methodology can be adapted to all types of countries and regions, as long as the company has an offline campaign running in one area, but is also present in other areas. It’s also flexible and able to track a wide variety of KPIs including website visits, conversions and clicks.

Remember TV tracking was once a rarity? Now it’s time to take the other offline channels into the performance realm too.

Wanna try out the tracking ATL game? Get in contact with us at hello@dcmn.com